A residential site in Margaret Drive drew bullish bids from 14 developers eager to replenish their land supply in the last Government Land Sales (GLS) tender for the year.

The offers for the 22,195 sq m site easily exceeded market expectations, with the super-aggressive one from MCL Land (Regency) catching analysts’ eyes.

Mr Nicholas Mak, head of research and consultancy at SLP International Property Consultants, noted that the gap between the top and second bids was the widest among residential GLS tenders this year.

He dubbed the MCL offer “quite bullish”, given that it is 14.5 per cent higher than the price of the land parcel where the nearby Queens Peak is being built. 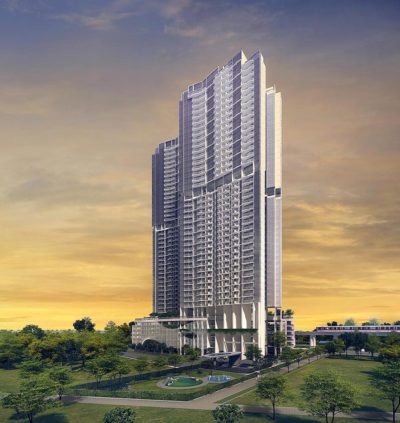 “Such higher land prices and strong participation among developers indicate that many developers are hungry for land,” he said.

The 99-year leasehold site, which had been on the Urban Redevelopment Authority reserve list, was triggered for sale after a developer committed to bid at least $185.758 million. It is located between two MRT stations, Commonwealth and Queenstown.

“This level of healthy demand from developers may encourage the Government to release more residential sites in the next GLS programme, which would be released this month,” he added.

The price of the Margaret Drive site exceeds those of nearby sites such as Commonwealth Towers, which cost $883 psf ppr, and Queens Peak, which cost $871 psf ppr.

But its relatively small size made it easier to swallow for developers.

Mr Ong Teck Hui, national director of research and consultancy at JLL, said that the “absolute price” was “much more affordable” compared with the $562.8 million paid for Commonwealth Towers and $483.2 million for Queens Peak.

The site, which could yield about 300 units, “would also be easier to market than the 845 units in Commonwealth Towers and 736 units in Queens Peak”, he added.

“The reduced development risk would have been a major consideration among potential bidders, resulting in many bidding competitively in today’s tender,” he said. 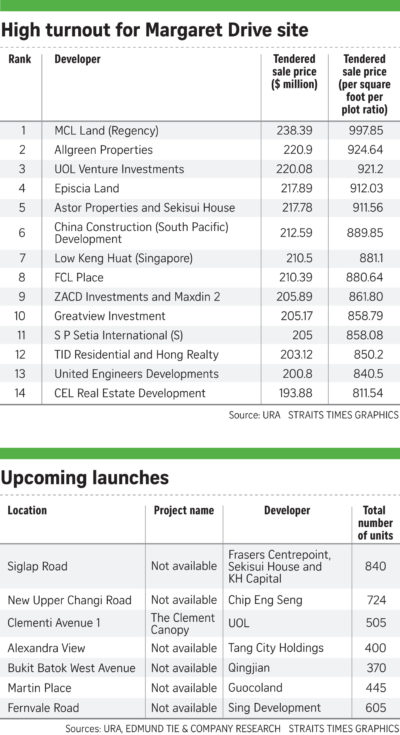 He added that the confident bidding also suggested that bidders are optimistic about the market outlook, “with a possible upside in prices by the time the project is launched for sale”.

Mr Ong Kah Seng, director of property consultancy R’ST Research, said that the Margaret Drive site could be sold at a high pricing. However, it has a very strong edge over its neighbouring sites, he said.

“A savvy investor will understand that Commonwealth Towers and Queens Peak each has so many units within the project that not only do the owners have to compete for tenants with other condominiums in the vicinity, but there is also intense leasing competition within the large project itself.”

Mr Desmond Sim, head of CBRE Research for Singapore and South-east Asia, noted that the developers in the tender were from a wide variety of countries, including China and Malaysia. “This shows their continued confidence in Singapore’s residential market, even as it is challenged by cooling measures,” he said.

Upcoming projects to be launched next year, according to property consulting firm Edmund Tie & Company, include UOL’s 505-unit condominium in Clementi, as well as Frasers Centrepoint’s Siglap Road development.

Mr Lee Nai Jia, head of South-east Asia research at Edmund Tie & Company, said that the Siglap Road site is particularly interesting as there have been no new sites in the area since 2001.